A favourable set of circumstance lead to the installation of Carbon8 Lighting's ground breaking new Discus LED High Bay luminaires at Capital Coated Steel's newly acquired factory in Newport, Gwent. This resulted in impressive savings in operating costs for the company and a reduction in its carbon footprint. 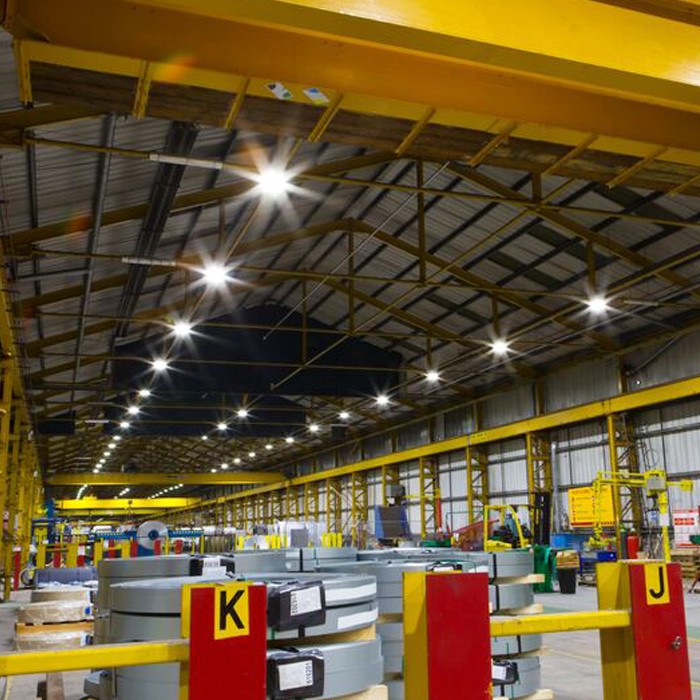 Capital Coated steel undertook a complete factory and office restoration. Capital appointed South Wales Maintenance and Engineering LTD to complete this large scale project. South Wales Maintenance and Engineering (SWM), have worked with Capital for a number of years and specialise in electrical/mechanical maintenance and facilities management. Shaun Jeffries, Operations director of SWM oversaw the entire refurbishment. Included in the project scope was a requirement for replacement high bay fittings for the company's 130,000 sq. ft. steel plant and new HQ, a site formerly owned by TATA Steel SWM invited their long term partner Business Industrial Solutions (BIS) to carry out a survey and propose a solution. Another supplier to the project had already recommended that the existing 400W SON fittings be replaced with a competitively priced 150W LED high bay fitting but BIS felt that this decision needed greater consideration.

Sean Regan from BIS, a company dedicated to saving clients money by providing and installing energy efficient solutions, contacted industrial LED lighting specialists Carbon8, who he had worked with on previous projects. When Sean rang, Simon Miles, the Managing Director of Carbon8, was in the product development department of the company's factory. Simon commented "When the call came in I was looking over engineering drawings and the first pre-production samples of our yet to be named, radical new LED high bay. I told Sean all about our new High Bay that was not due for release until March 2015 and Sean immediately replied, asking if we could deliver sooner as he felt that the combination of price and performance was perfect for the CCS project. After a number of hasty meetings and numerous calls, the opportunity started to take shape". The Discus LED luminaire was born!

Using Carbon8's projected 'on paper' figures, long before any real test results had been performed and without photometric testing, the 120W Discus was specified for the project in place of the more conventional 150W LED that had been earmarked for installation. Simon added, "Shaun and Sean trusted us enough to go back to the customer and propose installing the Discus luminaires and, based on the data that we provided it was agreed that the installation of 180 Discus fittings would proceed, on the understanding that Carbon8 would meet delivery deadlines".

The first production samples of the Discus fittings arrived in the UK at the end of January 2015 and a rigorous testing programme was carried out to ensure that the fittings met all of the predicted performance figures. Having been conservative with all of the predictive data, it came as no surprise that the Discus outperformed in every area. Delivery of the 180 fittings was made on schedule and the installation was completed on time and on budget.

By choosing to upgrade to the Discus LED high bay, CCS substantially reduced energy consumption and maintenance costs. The company also became the first customer in the UK to replace a 400W fitting with a 120W LED fitting and see vastly improved lighting. The figures are impressive; the total overall operating costs of the company for all light fittings has been drastically reduced from £88,712 to £27,581 with a payback period of only 3.25 years. The total saving in energy is 595,105 Kwh per annum and a massive reduction of 323,737 has been achieved in Co2.

In the short time since its launch, the Discus has taken the high bay lighting market by storm and Sean, whose company BIS boasts that its 5 Steps To Energy Fitness will help its clients reduce waste and save money, is understandably pleased with the outcome of the project. Shaun Jeffries of SWM is also thrilled with the end result and stated that the lighting puts a stunning finish touch to the project and helps to highlight the quality of the rest of their work.
​
With the relocation of the company from Cardiff to Newport everyone is in agreement that the new working environment has been transformed through the change from Sodium Incandescent to LED lighting technology and CCS now enjoys a perfectly lit working environment with far less cost.​
CARBON8 LIGHTING ILLUMINATE THE NEW TROPICAL MONSO...
CARBON8 LIGHTING PROVIDE ILLUMINATION AT AUTOSPORT...

By accepting you will be accessing a service provided by a third-party external to https://www.carbon8lighting.co.uk/